Arnaud Megret[1]
The Akinator is the primary character found in PC and mobile game Akinator. He is a genie who's primary purpose is to guess the real or fictional "character" the player is thinking of in as few questions as possible.

Akinator was first created in 2007, along with the founding of developer Elokence.[2] Akinator is described as having an "all-consuming passion" for guessing characters that players think of.[3] Akinator begins asking questions, with players answering "Yes", "No", "Probably", "Probably not" or "I don't know". If he is able to narrow it down by the twenty-fifth question, he will guess. If it is wrong, he will continue to ask questions and guess. If Akinator is unable to guess right at all, he will give up and allow the player to search for the character, and if it's not in his database at all, submit the character for review to be added. Players can rewards for getting the Akinator to guess a rare character on his first try. These rewards are (in order of common to most rare): Standard (light blue), Bronze, Silver, Gold, Platinum, Black. Rewards are also giving out for completing daily challenges.

Akinator paired with the logo for the game 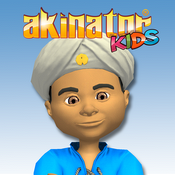 A younger version of Akinator, on the app icon for Akinator Kids