Alduin the World Eater is the primary antagonist of The Elder Scrolls V: Skyrim.

In the early Merethic Era of Skyrim, Alduin was among those worshipped in the Nordic Pantheon.[3] In Skyrim, Alduin interrupts the Dragonborn's execution in Helgen. After attacking Helgen, Alduin would visit various dragon burial sites and resurrect the dragons. The Last Dragonborn was the only one capable of defeating the dragons for good, as they could absorb the dragons' souls. Alduin and the Last Dragonborn would have their first fight on the Throat of the World, an enormous mountain range in the Whiterun Hold region. They would later have their final battle in Sovnegarde, the Nordic afterlife. Here, three Nordic heroes of the past help the Dragonborn kill Alduin once and for all.

Alduin flying over the town of Helgen 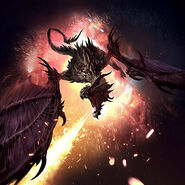 Alduin's artwork from his card in The Elder Scrolls: Legends