Matt Charlesworth[2]
Chell is the main protagonist of the Portal series. She is a test subject of Aperture Labs, aiding in the testing of the Portal Gun.

In Portal, Chell awakens in a Relaxation Vault and is greeted by a robotic voice named GLaDOS. GLaDOS tells Chell she will be part of testing for a new device for the Aperture Labs research center. During her testing, Chell finds openings in the testing chambers that lead to areas filled with writings scribbled by someone named Rat Man . These scribbles warn Chell of GLaDOS' evil intent. Upon completion of all test chambers, Rat Man's warnings are confirmed to be true as GLaDOS attempts to murder Chell. In order to escape the labs, Chell must defeat GLaDOS. Upon doing so, Chell is released into the world, only to be dragged back in by the Party Escort Bot.

In Portal 2, Chell is awakened by Wheatley, a personality core. He convinces Chell to help him escape from the facility, to which she agrees. When exploring the now run-down facility, they discover GLaDOS's shut down remains. After Wheatley accidentally turns GLaDOS back on, GLaDOS forces Chell back into the depths of Aperture Labs in order to resume testing. After some tests, Chell is trapped in Central AI Chamber with GLaDOS. In an attempt to defeat GLaDOS, Chell replaces her AI with Wheatley's. This immediately backfires as Wheatley goes mad with power. Wheatley procedes to reconstruct GLaDOS into a potato and accidentally sends them into a now unsealed corroded part of the lab, known as "Old Aperture". While exploring Old Aperture, Chell meets up with GLaDOS once again, and they form a plan to overthrow Wheatley in exchange for Chell's freedom. Eventually, Chell finds herself in Wheatley's poorly made test chambers, and Wheatley tries to kill her, stating he has found the "perfect replacements " for her. Chell is once again able to escape and she, along with GLaDOS, once again reach the Central AI Chamber. Chell is able to defeat Wheatley by linking a portal to the moon, creating a vacuum that sucks in Wheatley and Chell returns GLaDOS as the central AI. GLaDOS gives Chell her freedom, and returns her to the surface.

Chell as she appears on the cover of Portal 2: Lab Rat 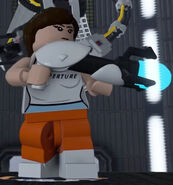 Chell as she appears in Lego Dimensions