Arnold Tsang
D.Va, real name Hana Song, is a playable tank hero in Overwatch. She was revealed in at Blizzcon 2015, along with Mei and Genji.[1] D.Va is one of the most popular characters in Overwatch, ranking high in popularity lists and being consistently played in all ranks of competitive.[2][3]

Hana's interest in gaming was introduced to her at a young age by her father, as they would play classic games such as StarCraft. Hana also had a friend Dae-hyung. They would often stay up late working on a hoverbike together. Hana would later win a race with this bike, although it nearly costed her life. Later, Hana would become a professional gamer, and begin going by the name D.Va. She would later win a Mecha Guardian V championship, surpassing both her teammate Yuna Lee and rival Kyung-soo.[4]

In South Korea, the Mobile Exo-Force of the Korean Army (MEKA) was struggling to defend the country agains the Gwishin omnics. The Gwishin were highly adaptable, and would eventually adapt to disrupt the government's drone network, forcing them to use human pilots to control the mechs. D.Va, as well Kyunga-soo and Yuna, were drafted due to their skills in video games that played much like the mechs were piloted. D.Va willingly accepted this challenge viewing it as another game. This is where D.Va got her iconic mech, named Tokki.[5] 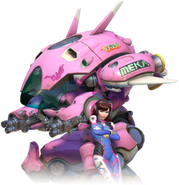 Official Heroes of the Storm artwork 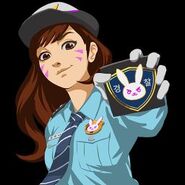 Artwork of D.Va outside of her mech