Mark Lesser[3]
Frogger is the titular character of the Frogger series of games, making his debut in the 1981 arcade game Frogger, in which he is among the frogs the player must direct across the street. At one point the best selling game of all time,[4] Frogger and his game have been cemented into modern pop culture, with numerous references and appearances throughout the years.

In the original game, as well as the subsequent sequels and ports, Frogger's main goal was to cross the street in order to get home. In Frogger: The Great Quest, Frogger goes on a journey across the kindgom to find a princess.

In the Frogger's Adventures series of games, Frogger is the defender of Firefly Swamp.

For a list of all of Frogger's video game appearances, see Frogger/Appearances.

Frogger as he appears in Frogger 2 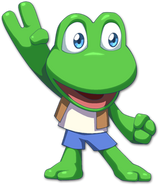 Frogger in a chibi art style 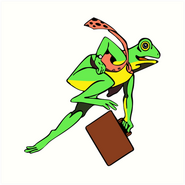 Frogger as he appears in Frogger: Hyper Arcade Edition 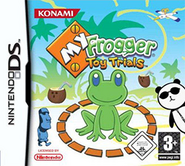 Frogger as he appears on the cover of Toy Trials