Atsushi Masaki
Kamek is a supporting antagonist in the Super Mario and Yoshi series. He is often depicted as an advisor to Bowser, and even raised him when he was young. Initially appearing in Yoshi's Island, Kamek has been a recurring villain in the Mario series.

Kamek is first seen in Yoshi's Island, in which he uses his magical crystal ball to see the future. He sees that the recently born Mario and Luigi would cause trouble for the Koopa family in the future. In an attempt to stop this, Kamek kidnaps the baby Luigi. When he realizes he made a mistake, Kamek sent his minions, the Toadies, to kidnap him. Before Mario and Yoshi fight a boss, Kamek would appear and use his magic to increase the boss' size. Even when Bowser is an adult, Kamek still acts as a caretaker and advisor to him. He often appears before boss fights, using his magic to add a twist. 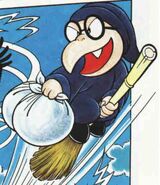 Kamek as he appears in the Club Nintendo comics 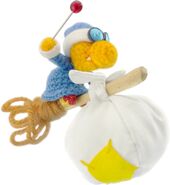 Kamek as appears in the Yoshi's Island games 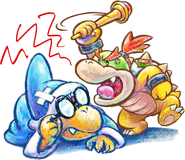 Artwork of Kamek and Baby Bowser
Community content is available under CC-BY-SA unless otherwise noted.
Advertisement