Luigi is Mario's younger twin, and was born as a Star Child much like his brother. During their delivery, Kamek would kidnap Luigi in hopes to use his power as a Star Child. Mario, with the help of the Yoshis, would save Luigi.

Luigi would later grow up to become a bottle factory worker with his brother,[2] and then later become a plumber. Much like his brother, Luigi would become a hero to the Mushroom Kingdom, often saving Princess Peach from Bowser.

In Luigi's Mansion, Luigi won a mansion from a mysterious contest he didn't remember entering. Luigi and Mario make a plan to meet up at the new mansion, but when Luigi gets there, he can't seem to find Mario. After encountering some ghosts, Luigi meets Professor E. Gadd. E. Gadd talks with Luigi, revealing that Mario was captured. E. Gadd also gives him the Poltergust 3000, a device that allows Luigi to fight and capture ghosts. Luigi later defeats King Boo, the villain who had captured his brother.

Luigi is often depicted as cowardly, although he tends to come through when he is needed. In the Negative Zone trophy from Super Smash Bros. Brawl, Luigi is said to have a "dark side he embraced in his brother's shadow".[3]In 2013, Nintendo announced that it would be the Year of Luigi, and multiple games and plenty of merchandise was released for the event.[4] It ended on March 18, 2014.[5]

Luigi's artwork from one of the Mario Party games 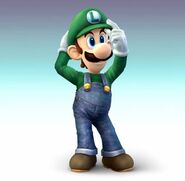 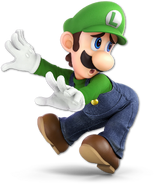 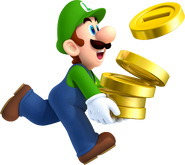 Artwork of Luigi as a baby 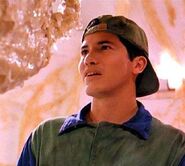