Arnold Tsang
Mei-Ling Zhou is one of the many Attack-type heroes in Overwatch, as well as its sequel Overwatch 2. Mei is a former climatologist who uses several ice-based abilities to damage and zone out enemies. Mei was revealed at BlizzCon 2015 along with Genji and D.Va.[2]

Mei is a world-renowned climatologist with the primary goal of preserving the environment. She specializes in the study of abnormal climate phenomena and their effects on ecosystem.[3]

Mei's biggest mission was being assigned to Watchpoint: Antarctica, one of the many Eco-Watchpoints set up by Overwatch to discover the origin of the planet's rising unexplained climate phenomena. While her team was stationed here, a catastrophic polar storm unexpectedly struck the Watchpoint. This left the scientists stranded and losing supplies, so in a last ditch effort they entered cryostasis. Before entering the pod, Mei recorded a video in which she expressed excitement in the new dataset from the storm.[4]

Upon waking, Mei found that nine years had passed. An external message had woken her, but the signal was too weak for it to properly display on the computers. Alongside her droid Snowball, Mei looked over the dataset and realized the storm was much worse than she thought. Not only this, but during those nine years Overwatch should have come to retrieve her team.

After discovering that Overwatch had been shutdown and Ecopoint: Antarctica was considered lost, Mei realized she had not seen any other members of her team. Rushing back to the cryo-chamber, Mei finds that all other pods had malfunctioned, causing her friends and coworkers to perish. This resulted in Mei promising to get the data they collected to the world, or die trying.

In order to receive the message from Overwatch, the only hope of her escaping, Mei had to fix the radio tower. Mei was able to scavenge enough materials to create an endothermic blaster and a makeshift antenna. Nearing completion, the base's power shut off. Although all hope seemed to be lost, Snowball sacrificed itself to give the last bit of power needed. Now able to fix the tower and place the antennae, Mei finds that the message was from Winston, who was calling all former Overwatch members to band together and fight the current problems in the world. With newfound confidence, Mei pays her last respects to her friends, and begins to travel across the Antarctic expanse in order to answer Winston's call. To Mei's delight, Snowball gains enough solar energy to turn back on.

On October 6, 2019, Hearthstone player Chung "Blitzchung" Ng Wai was suspended by Blizzard for making comments supporting Hong Kong protesters after winning a match at the Hearthstone Grandmasters.[5] In retaliation, many Overwatch fans began to use Mei as a symbol of the Hong Kong resistance.[6] 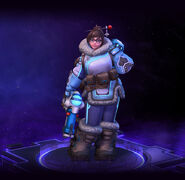 Mei as she appears in Heroes of the Storm

Promotional art for Mei's Heroes of the Storm release

Mei's bear pajama skin from Heroes of the Storm