Francis Pang, Mark Healey, Kareem Ettouney[2]
Sackboy is the main protagonist of the LittleBigPlanet series. He is a small, plush creature with a knack for creativity. He is often considered a PlayStation mascot.[3]

Sackboy first appears in LittleBigPlanet, where he meets the King in the Gardens. After visiting different lands and people, he founds out that the villain known as the Collector has been kidnapping the Creator Curators. Sackboy then travels to the Wilderness, the tundra that is home to the Collector's lair. After defeating the Collector, Sackboy and his friends are able to teach him how to be friends with others.

In LittleBigPlanet 3, Sackboy is sucked into a portal that sends him to the planet Bunkum. After being tricked by Newton into releasing the evil titans, Sackboy must get the help of the three heroes, Oddsock, Toggle, and Swoop, to defeat the titans and save Bunkum.

Artwork of Sackboy from LittleBigPlanet 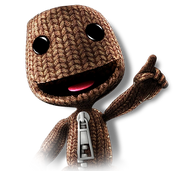 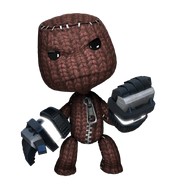 Sackboy equipped with the Grabinators

Sackboy in one of the karts from LittleBigPlanet Karting 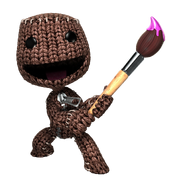 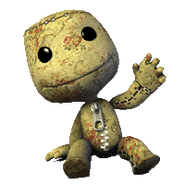 Sackboy with a floral pattern