The Man Who Makes the Impossible Possible

Solid Snake, also referred to as Snake, is the protagonist for many of the Metal Gear games. He was first introduced in 1987 with the game Metal Gear. He is known for his amazing stealth abilities and his diverse knowledge of weapons and languages. He is a highly popular character, ranking high on several "Top Video Game Characters" lists,[1][2][3] and is considered one of PlayStation's most iconic mascots.[4]

Solid Snake is the cloned son of Big Boss, a special force operative and founder of FOXHOUND. Snake is a former green beret, and a skilled special ops soldier who specializes in stealth and espionage. He is most often tasked with the dealing with and destruction of mechas known as Metal Gears. During his missions Snake must act alone, recieving help over a radio from various commanding officers and specialists such as Colonel Campbell, Mei Ling, and his best friend Otacon.

Snake as he appears in Super Smash Bros. Brawl 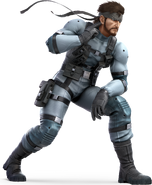 Snake as he appears in Metal Gear Solid V

Snake in the Bomberman style, from Super Bomberman R