The default player model was originally added in the rd-132328 version of Minecraft, where it was used as the model of a very basic mob named Humans[2]. This model would later be used as a player model for the first time in the 0.0.15a version of Minecraft, for the newly added multiplayer mode.[3] Markus "Notch" Persson first called Steve his name in 2010, where he was called Steve?[4]. This would later become his official name as confirmed in the "change skin" section on minecraft.net as well as in multiple official skin packs. 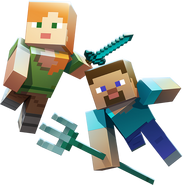 Steve and Alex from promotional art for the Aquatic Update 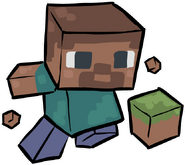 A screenshot of Ready Player One showing the many Steve models