Terry Bogard is a playable character in Fatal Fury series, as well as King of Fighters. He is one of the most popular characters in the series, and serves as a mascot character for Fatal Fury, and to a lesser extent SNK as a whole. He has received high rankings on several popularity polls[3][4][5], and has been referred to as an "eternal hero".[5]

Ten years before the events in Fatal Fury: King of Fighters, Terry's adoptive father is killed by Geese Howard, due to their conflicting opinions while under Tung Fu Rue's training. Terry and his brother Andy, fueled by a want for vengeance, began training in martial arts. After ten years of training, Geese sent an invitation across South Town for his "King of Fighters" tournament. Both Terry and Andy enter the tournament in order to fight and defeat Geese. Years later, in Real Bout Fatal Fury, Terry would adopt Rock Howard after Geese's death.

Artwork of Terry from The King of Fighters XIV 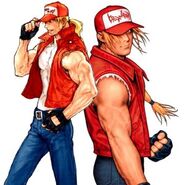 Artwork from Capcom vs. SNK

Terry from The King of Fighters 2000

David Leitch as Terry in the KoF film