The Vessel, Ghost, The Hollow Knight

Ari Gibson
The Knight is the protagonist and sole playable character in the game Hollow Knight. While best known for his starring role in Hollow Knight, he actually originated in a game called Hungry Knight, made by developers Team Cherry for a Game Jam. After the creation of the original game, they fell in love with the design of the Knight and designed a game around the character.

The Knight is one of the countless discarded Vessels, created by the Pale King and the White Lady to try and create the perfect hollow being to contain the Infection ravaging their kingdom. Like the rest of the Knight's vessel siblings, The Knight is genderless.

After it's birth within The Abyss, the Knight climbed it's way to the top of the chasm to witness the Pale King choosing the vessel that would go on to become the Hollow Knight. After the Pale King chose the Hollow Knight, the entrance to the Abyss was sealed and all of the remaining vessels, including the Knight, were left to be forgotten and fade away. Despite the sealing, the Knight and a handful of its others siblings managed to make it out throughout the coming years.

Upon arriving back in the Kingdom, equipped only with their nail, the Knight delved into the depths of the Kingdom, meeting multiple characters, both friend and foe. They eventually met with their half-sister, Hornet, the one child of the Pale King not created with the Void or the goal of stopping the plague. She is slow to trust The Knight, but eventually grows to respect him and believe he has the possibility to redeem the now ruined kingdom. 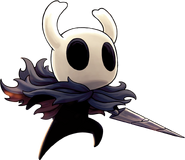 The Knight's sprite within Hollow Knight
Community content is available under CC-BY-SA unless otherwise noted.
Advertisement