Edit
watch 01:36
We're Getting Mutants in the MCU - The Loop
Do you like this video?
Play Sound

Geoff Goodman
Tracer is a playable character in the team-based first-person shooter Overwatch. She works as the mascot of the game, being seen in promotional material and the official box art of the game. Tracer was confirmed to be homosexual in an official Overwatch comic, much to the praise of many fans and critics.[2][3]She was the first Overwatch character to be worked on[4], based on the Jumper class from cancelled Blizzard project Titan.[5]

Tracer was the youngest person to be included in the Overwatch program, hand-picked to test the newest fighter created by Overwatch, the OWX-01 Slipstream. This fighter was intended to have the ability to teleport, and was speculated to become the definitive form of aerial combat. Issues arose when the teleportation matrix malfunctioned during its first test flight. This caused the fighter to disappear with Tracer still inside, with her being presumed dead. Months later she would reappear, her molecules desynchronized with time, and she in a state of disappearing for hours or days at a time. Luckily, Overwatch scientist Winston was able to create a device called a chronal accelerator, giving her control over her desynchronization.

Seven years later, would begin training for Overwatch under the supervision of Winston and Dr. Ziegler. Tracer excelled in her training, even giving skilled Blackwatch member Genji trouble during combat. Commander Jack Morrison was impressed, and would later give Tracer permission to be promoted to active duty. Tracer would later go on a mission with fellow Overwatch members Mercy, Torbjörn, and Reinhardt.  They were tasked with dealing with a riot lead by Null Sector in King's Row, London. The team was successful, although the evens that transpired were classified. Tracer would later go on another mission with Overwatch members Winston, Mercy, and Genji. Their goal was to apprehend Maxemillion, and omnic who was working with Talon, a terrorist organization. The team was successful, and Maxemillion revealed that Talon's leader Doomfist would be in Singapore in three weeks. Tracer, along with Winston and Genji, would go to Singapore in order to confront him. 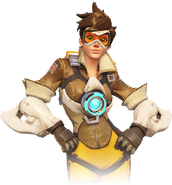 Tracer as she appears on the official Overwatch website 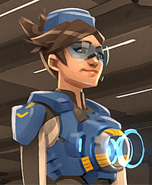 Tracer in her cadet uniform 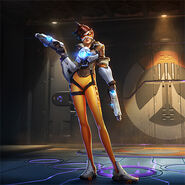 Tracer's Heroes of the Storm artwork